Brewing Beer at the end of the World

On the northwesterly coast of Orkney’s mainland, about 40 miles north of John o’ Groats, lies a collection of buildings that once formed a part of a dairy farm. Battered by wind and showered by ocean spray from the Atlantic, the former cow sheds, farmland, barns and stores are now home to the Swannay Brewery, a brewhouse achieving something on a scale completely different to its rustic environment.

Here, one five-barrel plant and one twenty-barrel plant produce cask and bottle ales ranging from, in the brewer’s own words, “hoppy session beers to double-digit strength, barrel-aged porters”, all from just one strain of yeast.

Imperial Beer Club spoke with Lewis Hill, the latter half of the father-and-son team at the Swannay, to ask him about the brewery – and the beers they produce:

The history of the Swannay Brewery and the Orkney Islands 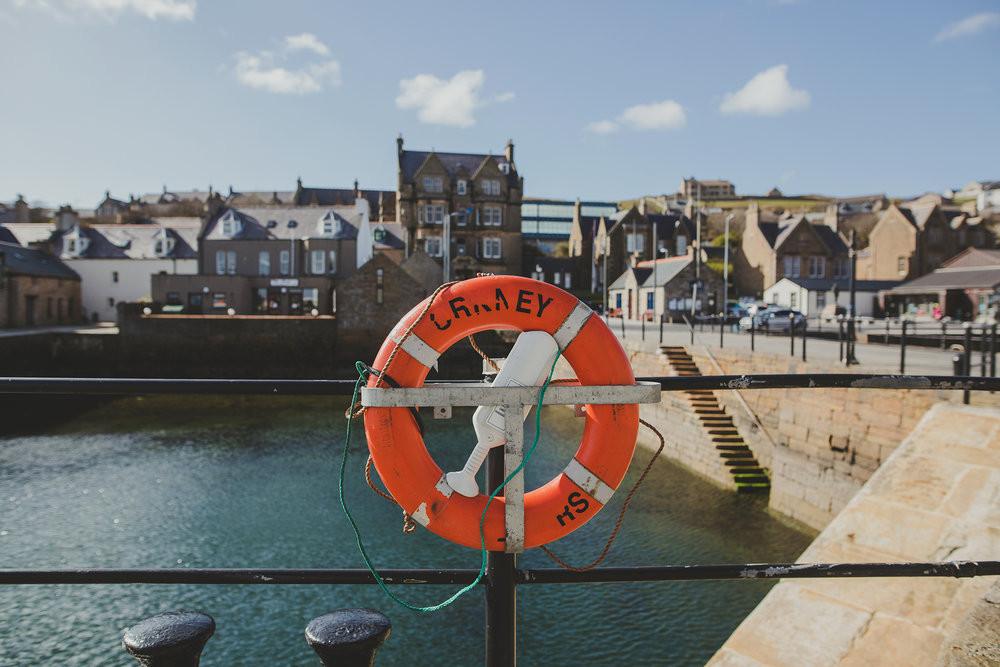 When brewer Rob Hill first arrived at Swannay Farm in 2003, he wasn’t looking to establish a brewery – he was looking to buy a clock. One year later, however, he had bought the whole building complex with a view to setting up a brewery.

“Rob bought the building to start a brewery as beer was his passion. In many ways it was foolish as the building is pretty far from what a conventional brewery is thought to be (it’s more like an age-old Belgian brewery) and we’re still working on developments that will take years to come. It’s a labour of love.”

Orkney’s history dates back over 8,000 years and it is rich in Viking folklore. Nearby Scapa Flow (Old Norse for ‘Bay of the Long Isthmus’), inspired the first beer produced at Swannay: the Scapa Special, a flagship pale ale that still accounts for a third of all the beer they brew today. That theme continues; all of Swannay’s beer names are inspired by maritime themes and Orkney’s history. 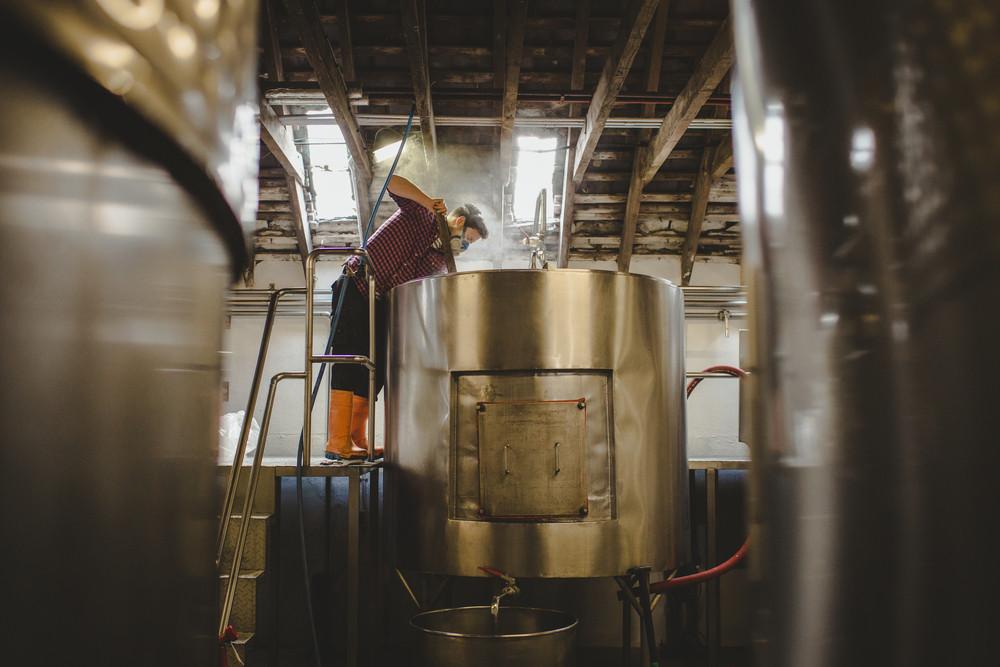 Not long after starting, Rob’s 5-British Brewers Barrel (BBL) kit was completing four brews a week – with the man himself doing all the brewery work, including sales and delivery, by himself. In 2010 Rob’s son Lewis joined his father and nowadays the team at Swannay is six strong, using a 20-BBL plant four to five times a week. Rumour has it that the target is to start using a 100-BBL plant in the near future.

“I grew up in a brewery (the old one that my dad worked at) – you could pretty much see the mash tun from the breakfast table – but I never wanted to be a brewer. I went to Edinburgh to study economics at much the same time my dad started his new venture.

“Hearing of his struggle to get off the ground whilst learning about beer at places like Cloisters Bar, the Bow Bar and the Abbotsford, I thought I’d ‘help dad out’ between studies; six years later I’m still here.” 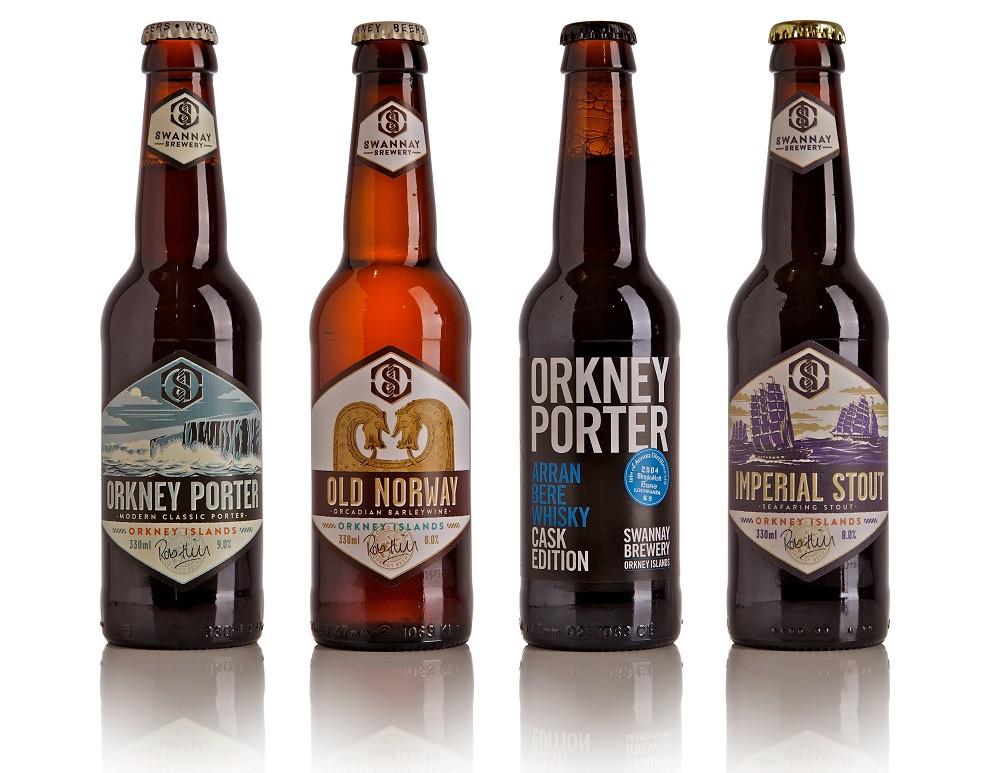 That’s enough about background; let’s talk about what matters – the beers. Swannay Brewery’s beer is divided into a Core Range and its Big Beers, and all of Swannay Brewery’s core range brands have won awards at national or international level – totalling over 100 in just over ten years of brewing.

We have great water up here. We’re starting to experiment with local grains. For barrel ageing the lack of seasons due to our island location (it’s never hot or cold, really) is good for the casks. Also, the spray from the Atlantic Ocean gives the beers a slightly salty edge in the winter!

However, the Big Beers are the ones that matter for Imperial Beer Club fans:

This is Swannay’s take on the classic porter, which uses HNB and Goldings hops and Maris Otter and barley malts.

Dark yet surprisingly light, it has notes of red fruits and a hint of smokiness.

Swannay’s imperial stout is dark with chocolate and fruit in the nose and prunes and oranges on the palate.

Made with HNB and Simcoe hops and Maris Otter, chocolate and barley malts, it has an almost Belgian aftertaste.

Bere barley – native to Orkney – is probably one of the world’s oldest cultivated cereals and goes into Isle of Arran Bere Whisky.

Swannay’s porter is aged for 18 months in these whiskey barrels, adding a smokey sweetness to the Brambling X and Goldings hops, and the Maris Otter and roasted barley malts.

All of the above whistle-whetting begs the question: which of Swannay Brewery’s beer does the man himself prefer – and which is he most proud of? Which other brewers are achieving great things at the moment?

“On a dark, windy night I love an Orkney Porter – I think this will be one of our classic beers over the longer term. If I’m drinking in the Orkney pubs, our Scapa Special is just perfect, and when it’s fresh I think our Muckle IPA, from the Mutiny range (not endorsed by my father!) is a really great IPA.

“I really enjoy Beavertown Gamma Ray. That may seem like an obvious choice but I think it’s a great beer with relatively unique hop characteristics from the Calypso hop. I always go back to William Bros Fraoch and the classic Belgians.”

Final thoughts: the future of the Swannay Brewery

All that’s left to ask is: whats next? What does Swannay have planned for this year and what beers – particularly which imperial strength beers if any – are coming out soon?

“We’ll launch the Mutiny range properly and we’ll do more with the local Bere barley. We might try an imperial IPA if we get all the other stuff done first!”

Interesting in getting your hands on some imperial strength beer?

If this has whetted your appetite then why not check out our latest boxes, or consider becoming a member.

Or if you just want to find out about new beer as soon as it becomes available then you can register for our newsletter below.