Today was the shortest day of cycling – just 46km, but still about 10km further than my legs wanted to go.

Luckily just inside Bruges city walls is the Brouwerij de Halve Maan – where I had lunch washed down with their excellent Tripel. Then a little later it was on to Cambrinus – now this is a beer menu: 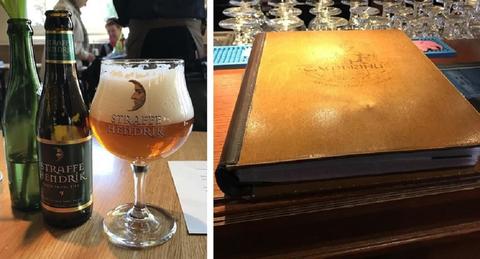 There were several beers on tap, such as Delirium Nocturnum, and some interesting bottles to try. The horn was a bit gimmicky, but the Tripel contained within it was very good with lots of flavour from the yeast.

Just around the corner is Cafe Red Rose and a chance to swap wooden bar stools for comfy chairs and a couple more beers, such as the 10% Tjeeses Reserva BBA from Struise Brouwers – aged in Makers Mark barrels – and a Troubadour Magma IPA at 9%.

Tomorrow it’s back to a slightly longer day on the bike as I head towards the border with France.

Thirsty work cycling from Rotterdam to Antwerp
Scroll to top