Ready for a different kind of beer club?

We are Imperial Beer Club – the only beer club dedicated to exploring the world of imperial strength beer.

Join us for limited-release boxes of adventurous, high strength beer with an emphasis on big bold flavours.

Become a member and you’ll get pre-sale access for every box and receive discount every purchase.

We release small numbers of boxes for general sale.

If you’d like to be notified when a new box is available – sign up for our emails using the form at the foot of the page. 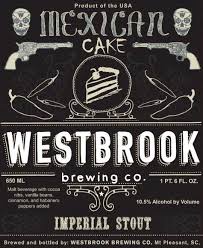 We have a wonderful box of beer for you.

Way back in December 2011, we brewed our first anniversary beer – a serious imperial stout aged on cocoa nibs, vanilla beans, cinnamon sticks, and fresh habanero peppers. It was so delicious we decided to bring it back once each year – Westbrook Brewing

Not only do Westbrook Brewing Mexican Cake, the box includes the legendary Prairie Bomb!, Perrenial Coffee Stout 2020, a pair of pastry stouts from The Bruery’s ‘Bakery’ series and a wonderful Imperial Porter from Zagavor of Russia.

Plus the usual smattering of beery treats from closer to home.

Included in the box:

We will let you know when new boxes are available